Our Governing and Pastoral Teams

Posted in: Our Vision

As we come out from under the board of the CMA, we have a few choices to make in how we replace that board: an elder board, a majority elder board, and a two-board system where the pastoral and the governing aspects are separated.

I kept pushing this off until I had peace about which one.

Now I have peace.

We have decided to go with -- primarily based on the people in our church and what role they're already fulfilling --  a two board system.

A pastoral team, and a governing elder team.

Before I lay out those two teams, however, I want to emphasize that this does not take away from the decision-making and leadership of our life group leaders and our ministry team leaders.

While this is not an org chart, this is a way that I see a complementary leadership structure, where all of us are called to submit to each other in various ways: 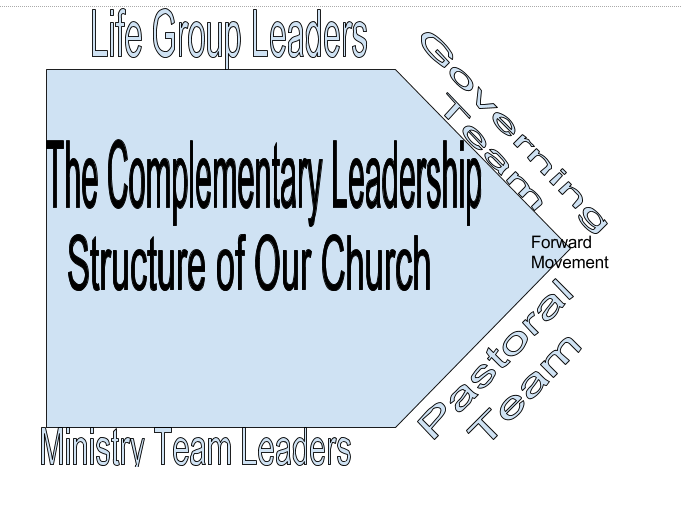 That said, take a look at the two teams below.

PASTORAL TEAM (Paid and volunteer staff)
The purpose of this team is to manage the pastoral operations of our church and oversee different areas.

These men and women have already been doing the things listed, so their roles are not new, but bringing them together as a team for more synergy is new.

Our governing team is brand new, with the exception of Jack Miskin, who was appointed as our first elder almost a year ago.

The purpose of this team is:

- personal accountability for the lead pastor
They will be holding me (Pastor Chris) accountable as a man, husband, and father; seeking to make sure I am living with integrity and above reproach and sexually pure.

- operational accounity of the lead pastor
They will be holding me accountable to how I lead the pastoral staff as well as the other leadership teams.

The governing team, because of the money and resources they are responsible for, will serve for a term; and each year we always want to be adding at least one new person as well as rotating one or two off.

According to our constitution, the lead pastor appoints this team the first year, but each subsequent year our church body votes on those brought before them.

Below are the men that I (Pastor Chris) chose for this first round in collaboration with Jack Miskin. We spent the last 6 months meeting with them, talking to their wives, setting standards, reading together, and giving each of them time to pray about it (again, in the future the church members will have more say in it).

Some of these guys may not seem obvious because they are not in the spot-light speaking or running ministries. That's partly the point. As a counterpart to the pastoral team, they are to be objective about what is actually being effective for Jesus' mission.

If you have any objections to the character of any of these men based on what you know about them and how that lines up with the character qualifications listed in 1 Timothy 3, please talk to Jack or myself.

That said, we are confident in the men we asked for this first round because:

- they do not have an unhealthy desire for titles or need to be recogized.

- they do not feel called to be in vocational church ministry at this time, which is important in objectively evaluating different ministries' effectiveness (in other words, they have one reason to be on this team: "what's best for the church?")

- they are a mix of ages, backgrounds, giftings and passions

- they all have shown a passion for reaching the outsiders around them, and sacrifically giving of time and money to do so.

Again, if you know something about their character that you think should disqualify them from serving in this capacity, please bring it to the attention of Pastor Chris (chris@truelifenj.com) or Jack Miskin (jlmiskin@yahoo.com) within the next week.