“If you wear a crown, you can’t look down.” – DJ Holliday

I have this thing about crowns. I love the sparkle and the majesty, but mostly, I love what they symbolize....authority, position & power.

I suppose it began with the paper tiaras on my birthday and progressed with my Miss America obsession. A young Jersey girl, sitting with her stove-top Jiffy Pop, watching with wonder the young ladies chosen to represent beauty and grace, wanting to be one of them. I watched the faces of those who were not called for top ten, all that hard work, all the promise of the crown was finished for them. Then came the crowning...a moment of regal tribute and royal splendor....NOT! The tipping tiara, the screaming crowd, the hysterical winner, and the fabulously fake jubilance of the losers. I didn’t want all that chaos, I just wanted the crown. Not just the crown, but all that went with it. The title, the glamour, and the authority.

The first Christmas .... imagine... Jesus seated on His heavenly throne, taking off His crown of majesty, then looking down towards earth, for me......He rises, places His glorious crown on the seat of His throne, turns left and looks into the loving eyes of His Father, they both smile, they know - it is time for Him to take His place on earth.

The first Christmas, when Jesus came to earth...for me. He traded His crown of majesty for a crown of thorns....for me. Jesus left His crown in Heaven because He chose to bring all His authority, position, and power to earth, as a babe in the manger, knowing the crown of thorns was ahead. He did it for me.....and you

When Jesus walked the earth, His crown was invisible to those around Him, but He knew it was there. He knew He was the son of God, He knew He was crowned with all authority and power, the crown was always there. He did not flaunt His position, He just walked with His head up, knowing He was crowned. When they mocked Him and crowned Him with thorns as long as three penny nails, He knew who He was and why He was there.....but He needed to look up, and cry out....perhaps to remind us that we can look up and our crown will never fall off!
I still love crowns, but they have a different meaning to me now. They still symbolize position, power and authority....my position in Christ, my power in the Holy Spirit and my authority to declare His truth over the things of earth so they grow strangely dim in the light of His glory and grace.

Christmas is really about trading crowns.

Jesus traded His so I could have mine! Because He traded His crown of majesty for a crown of thorns, I can be called a child of the King, a child of the most high God, crowned with glory and honor. I can wear my crown every day, look up and it won’t fall off, look down and I may have to hold on to it ....but it will never fall off! My crown may be invisible to those around me, but I know it’s there.....I just have to adjust it on a daily basis!

So in Christ Jesus you are all children of God through faith... Galatians 3:26

You made him a little less than divine, but you crowned him with glory and honor....Psalm 8:5 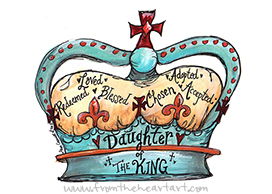 Beautiful! I will be rereading this as I want it to sink in. Thank you!

Thank you Debi for sharing this! Much food for thought, great perspective.